What is Radiant Historia?

Radiant Historia: Perfect Chronology is a story of a man named Stocke. You are a special covert operations unit employed in the mechanical kingdom of Alistel. In the world of Vainqueur, desertification is sweeping the entire world. Mana has gone dry, and people are disappearing into sand. Once-lush gardens are now barren wastelands, and the world is losing hope. As Stocke, your duty is to find the cause of desertification, all at the while going to war with the neighboring kingdom of Granorg for control. The kingdom of Alistel believes that Granorg is responsible for the desertification, and your duty is to escort a spy from the other kingdom. Raynie and Stocke – your new recruits – accompany you to Granorg. Afterwards, you are given a mysterious tome – the White Chronicle – and set forth to unravel the mystery of the world’s desertification.

The world of Radiant Historia is a vivid, beautiful, yet tragic wasteland. You’ll see deserts and plains, but you’ll also see lush, green landscapes, royal castles, and dark dungeons. You’ll also be crossing through time, through the use of the White Chronicle. The White Chronicle will take you across two parallel versions of history, where your decisions will shape your paths all the way to the very end. You’ll meet characters from varying races, some of which are from Beast tribes, such as goat-like Satyrs and the ape-like Gutrals.

The story revolves heavily around the decisions you make all throughout the Radiant Historia: Perfect Chronology. This means there will be decisive points in the story where you must make a decision. The wrong move you make may lead to tragedy and cost you dearly. However, you will return to Historia where you have the chance to alter your decision. These decisions will affect the relationship you have with your party members, to include the decisions they choose in response, no matter how drastic.

Note that getting the “wrong” decision is not a bad thing. The White Chronicle will record all of your decisions, which will be used as a “node” point. These include the many endings that you will see throughout the game. Getting all of these is necessary for total completion of the game. Even if you end up seeing a tragic scene, don’t fret. Not only can you alter time, you can see the “what-if” scenario that will build upon the game’s true ending. Retro Visuals and a Beautiful Soundtrack

Radiant Historia: Perfect Chronology’s utilizes 2D sprites on a 3D plane. The in-game graphics are all taken from the original DS title. The visuals are a throwback to the days of the SNES, PS1, and the GBA, which were among the glory days of the JRPG. These sprites are all well-animated and consist of some of the most detailed boss designs you’ll see in a 2D, sprite-based game. The environments are all rendered in 3D, but the fluidity with the 2D sprites mesh incredibly well.

Yoko Shimomura composed the music for this game. She is famous for composing the Kingdom Hearts series. Shimomura’s work also includes Street Fighter II, Super Mario RPG: Legend of the Seven Stars, Legend of Mana, and the Mario & Luigi series. Radiant Historia has a soundtrack consisting of 25 tracks. And yet, every one of them stands out. They range from Arabian desert themes, to piano melodies, and tones of sadness and reminiscence. You’re also greeted to a number of epic battle themes, including “Rebellion,” “The Edge of Green,” “Blue Radiance,” and my personal favorite, “An Earnest Desire of Grey.” The music ranges from pleasant to downright tragic, and there will certainly be a favorite for everyone. 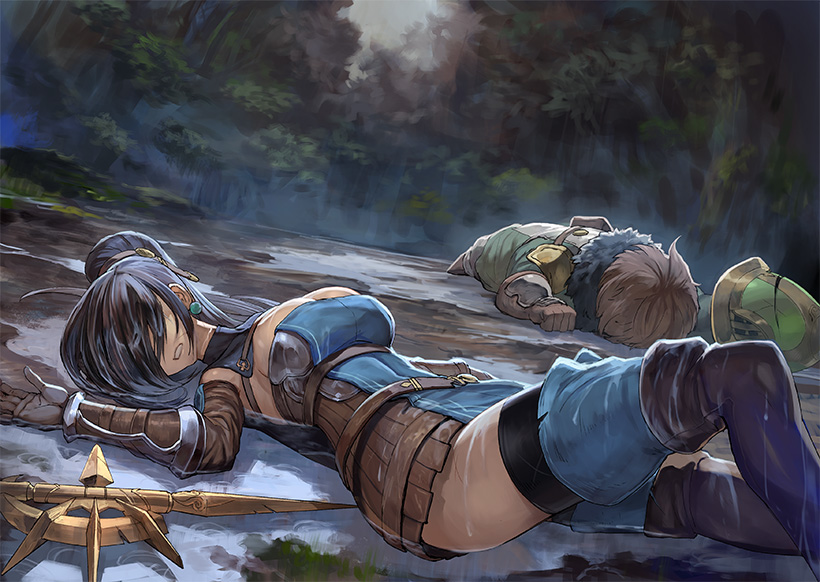 Radiant Historia: Perfect Chronology takes cues from the 2D JRPG genre. You enter battle with a team of 3, and everyone has their own abilities. Stocke has balanced stats around his offense and defense, using a sword in battle. Raynie has a spear, but can also use magic. Marco is armed with a sword, but is built as a healer. Eruca has a gun, and can fight at long range. Aht has the ability to cast magic on tiles, which I will get to in a minute. Rosch and Gafca’s stats are built heavily around offense and defense, making them the tanks of the game.

The tiles in this game are the positioning aspect of the battle system. You can knock enemies back or draw them forward. There are nine tiles on the battle. Using knockback abilities becomes crucial later. You will gain the ability to lay mine traps of magic on tiles. Knock an enemy into a tile, cast with magic, and they will take heavy damage. Use your knockback and pulling abilities for incredible combinations and setups. Note that your party can also use combo attacks to build damage on multiple enemies at once.

Some enemies, however, are massive. There is no repositioning them. This will require strategy to beat them, as they will do heavy damage. Your teammates can heal, buff, cast magic, defend, and so forth. There are many options revolving around your party members. The strategy includes a mix of using your tiles, spells, and the strengths of your team. Also, certain battles will allow another character to enter and use support abilities. This will only happen in certain scenarios.

World Progression in the World of Vainqueur.

In Radiant Historia, your story will progress based on your right decision. If you had to undo a past mistake, you’ll be able to return to the point in time before that critical moment. As you advance, you’ll be going to various points of the world on foot. There’s no overworld or stage select, so the entire world – towns, dungeons, and those in between – are all interconnected. Much of your travel will even consist of going from the Standard History route to the Alternate History route.

By doing this, Stocke will gain new skills and abilities. Some of these include weapons he could not procure in one route, but was able to find in another. For instance, he may need a special ability to defeat a difficult enemy in one route. By losing to this opponent, his only option is to enter the second route and gain the new ability. He then returns to the first route and is able to take down his opponent. As a result, the rest of the game will involve these types of scenarios.

The first change, from the original, is the new art style. Atlus has redone all of the character artwork. This has been handled by Masaki Hirooka, who has worked on the art for Castlevania: Order of Ecclesia and Kid Icarus: Uprising. The designs include the new art style and even a complete overhaul for a major character, Eruca. The game introduces a new character named Nemesia. She is connected to a third, new timeline. Her story consists of new quests for the game. Lastly, all cutscenes now include voice acting. The voices are all dubbed only in English, so there is no dual-audio option.

The game opens up with a beautifully animated cutscene. Atlus has drawn new artwork pieces specifically for event cutscenes. New node points have opened up as a result of the third timeline. If you’re new to Radiant Historia, it’s a beefed-up version of the original DS title that will be more than satisfying. If you’re a veteran player, everything above comes included with a New Game+ mode and the Append mode, which includes the third timeline from the start.

What was good about Radiant Historia?

What I loved about the original game was largely its story telling. I enjoyed the tale of attempting to save a hopeless world from the depths of despair. I loved the character interactions and the development of story based on your choices. The time traveling element of the game made me feel I could undo decisions that had completely cost me everything. The soundtrack gave me reminiscent feels of Kingdom Hearts, and the visuals gave me a throwback to titles, like Final Fantasy and Chrono Trigger.

The game will weave tales around NPCs, the people you save, and the people you die. You are bound to see death many times. The tragic undertones belie a story that rarely shows its glimmers of hope. Thus, it poses a question. Is it a world worth saving when you have many opportunities to throw it all away? Or will you persevere to the very end despite the many choices that could guide you to an ending of momentary happiness? Your choices will affect the lives of you and your friends.

The game’s battles pace themselves well, being challenging as well as fast-paced. No battle in the game ever felt too hard or daunting. It felt balanced around the party members, allowing you the option to play whoever you wanted. I was partial to Aht, due to the immense damage of her tile spell abilities. But there was no punishment for choosing to pick a different team of characters. There are no random encounters in the game. Thus, you can choose to flee enemies on the map, or you can attack them and get the preemptive strike. The game’s battle system was quite enjoyable and offered that bit of strategy to keep you from doing more than simply mashing attack. 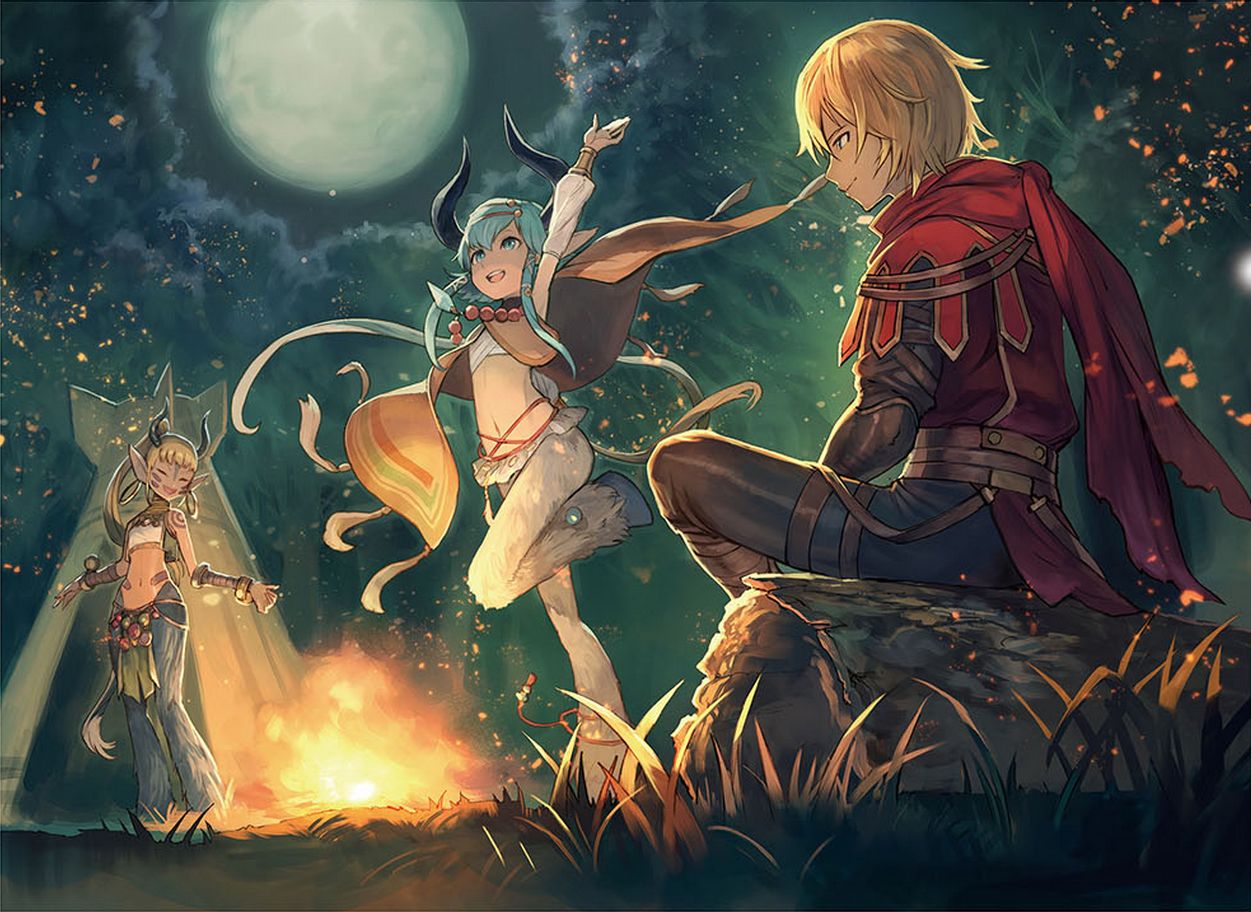 Is Radiant Historia: Perfect Chronology the right game for you?

RPG fans warmly welcomed Radiant Historia upon its release. The new visual design is more appealing for a broader audience given its softer look. Anime fans will appreciate the artwork, storyline, and the beautiful opening cutscene. Players fairly new to RPGs will enjoy this game’s battle system. These players may enjoy the game the way many gamers enjoyed titles, such as Final Fantasy, Super Mario RPG, and Chrono Trigger, back in the day. It’s great for both RPG enthusiasts and casual 3DS fans who want a little adventure in their lives.

Anyone who has played the original game has a bit of new content to look forward to. If you’ve been looking for the perfect excuse to revisit Radiant Historia, this is the perfect chance to do so. There’s roughly 40 hours of storytelling in the game, and this includes the side-quests. Every side-quest is connected to the true ending. Thus, there is every reason to visit all the decision paths and see how the full story unfolds.