Bowser’s Minions is a game worth playing. Check out the scoop on the second mode of Mario’s 3DS Adventure!

Comes in all shapes and sizes.

What is Bowser’s Minions?

The Minion Quest is a side-mode that stars the tale of a Goomba as he attempts to rescue Bowser from a treacherous fate. Gaining the trust of other Bowser troops, such as Koopa Troopa, Boo, Shy Guy, and attempting to win the respect of the seven Koopalings, this brave little Goomba leads an army to prove his loyalty to his king, and to prove that Goombas are worth more than lowly grunts. 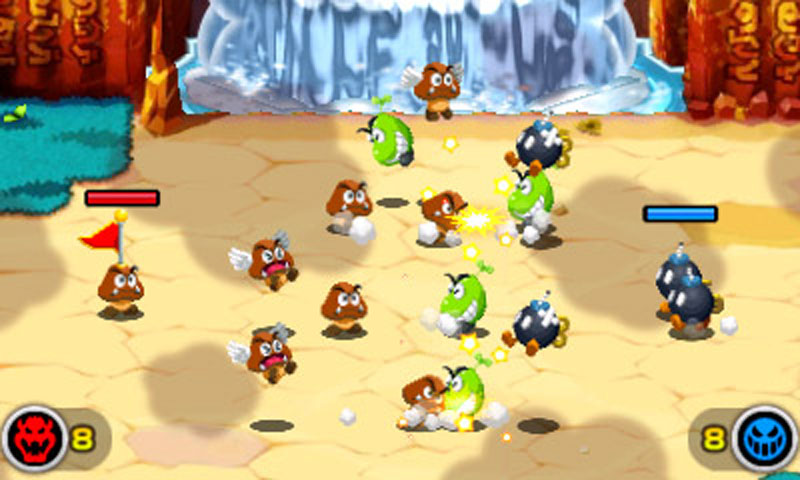 The mode of this game is based on the battle system of Mario & Luigi, but with a twist. Despite similar visuals, you will be building your team before battle, and deploying them to fight for themselves. This mode is derived from the real-time battle system. You have three types – Melee, Flying, and Ranged – and it flows in a rock-paper-scissor system. One beats the other, and so forth. Picking your team is a crucial step towards victory, while utilizing Captain Commands and Action Commands will turn the tide in battle. Your Captain Commands will allow you to Rally Troops, Parry blows, or even summon a Thwomp to squish enemies. Action Commands return, which range from bouncing on enemies’ heads to hitting the A button perfectly to raise the meter to the top and max out your stat boost.

Some of your allies are quite burly. Captain Goomba’s not alone on this one.

Is there a storyline worth following?

The original Mario & Luigi adventure is worth owning enough as is. But what makes Bowser’s Minions special is more than its experimental new game mode. The story involves a tale of bravery, character development, earning trust, respect, and camaraderie. Information is exchanged back and forth between the characters, such as other minions doubting the abilities of Captain Goomba or believing the chances of winning a battle against a Koopaling are virtually nonexistent. Yet, the perseverance of Captain Goomba pushes them onward, because it means more to save Bowser than it does to turn tail in the face of danger!

More than just a brave tale of Bowser’s troops, the game does an exceptional job telling a story that fills in the gaps of Superstar Saga. Mysteries, such as the Invincishroom’s origin, the cause of Bowser’s amnesia, how Popple found his rookies, and even what happens after the ending of the original game are all explained in this. It’s a side-tale that expands the length of the entire game, as you’ll be visiting all locales from the game. Granted, these will be formatted into a “stage select” sort of way. You’ll play several missions in each world before moving onto the next, and you can return any time. In addition to the required stages, there are multiple quest stages as well, which will challenge your wits against a stronger enemy team.

How endearing is the gameplay?

The game’s reward factor comes from the enemies you encounter and befriend. After nearly every battle, your Captain will recruit a small number of enemy units. These fall under the three classes listed above. Your ability to manage them and adapt to each stage plays a vital role in victory. Grinding isn’t a necessity until the very end, as you can win every required battle without having to repeat a map. During the last fight, however, it is highly recommended to grind a few levels to match up. The process doesn’t take more than 30 minutes. However, that’s considering the level is a bit higher than the rest of the game’s average. Within a 2~ level difference, on average, winning each battle comes from good strategy. The game has a decent challenge, yet suitable for newcomers and veterans.

The quest’s length is a little over 10 hours long, to include the extra maps. Your Captains will learn more skills as you level them up. Koopalings serve as the bosses of each world, but will serve as valuable allies if you should recruit one. 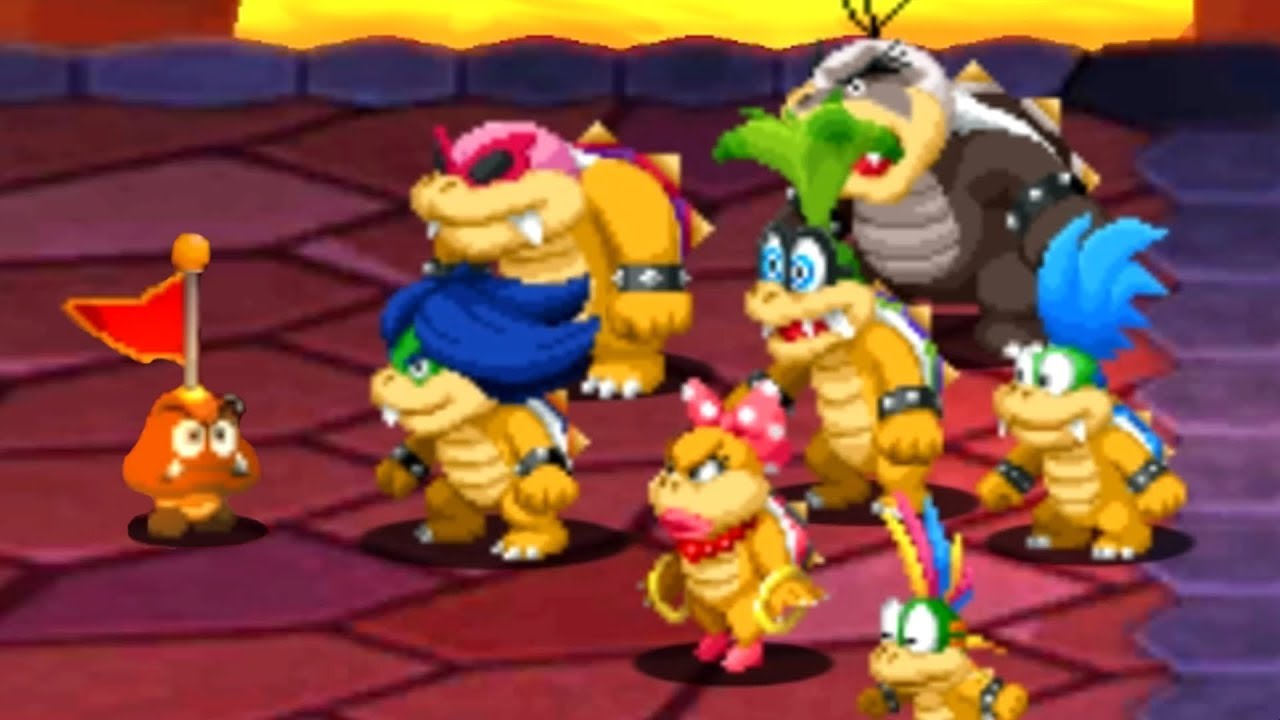 How powerful do you think your team would be if you recruited all seven Koopalings?

Keep in mind, your stats will boost depending on your team formation. Pay attention to the notes whenever you select your team. You can send out ten units at a time, to include one Captain. Goomba’s a Melee fighter, Boo flies, Shy Guy is a ranged fighter, and Koopa is also a Melee type, albeit a defensive one. Entering the last chapters of the game unlocks some rare, cameo characters. It’s just another little bonus to look forward to.

Finally, Bowser’s Minions ended up being a surprising experience. I expected a throwaway mode that would amount to a boring gimmick. Coming from someone who was a bit less pleased with some of the recent Mario & Luigi outings, it’s not uncommon for Alphadream to throw in mechanics that feel tedious. In this case, however, they nailed it. My personal recommendation would be to continue this on a mobile device app. It would make for a fun game for anyone to play. Plus with being a standalone game, it would allow Nintendo review to continue adding content to the game and expand this further than it was on the 3DS.

If you own a 3DS, for starters, Mario & Luigi: Superstar Saga + Bowser’s Minions is well worth it. The original game is a remake of a great RPG, which takes the spirit of Super Mario RPG and Paper Mario, and forms its own identity. If you’ve never played a Mario & Luigi title, it’s perfect for newcomers and younger players. It’s a charming, beautiful game with a soundtrack composed by Yoko Shimomura, composer of the Kingdom Hearts series and many other classics! But the Bowser’s Minions mode is not to be skipped. If you end up owning this title, please give it a try. I’m sure you will be as surprised as its quality as I was.